If you’re reading my blog you know I’ve already done one post about my cemetery – so hopefully this one is a bit different.

I realized recently that the huge pines I’d allowed to grow weren’t doing the cemetery any favors. Two were right at the headstones and pushing them up and one of the two was dead – so plenty of limbs down anytime the wind blew. Chuck told me years ago that  it wasn’t a good idea to let those pines grow – but did I listen? Of course not. Seriously annoying some of the things in my world today that he warned against but I did anyway.

But I digress. At least two of the large pines in the cemetery needed to come down – NOW. Fortunately Hunts Tree Service – is an excellent tree cutting company that is nearby and has done work for me in the past. So, one afternoon last week they came and down the trees went. I sat on my interesting bench for much of the event and watched and took a few pictures and videos. It’s fascinating watching them work – and even more so watching them put the huge trees down exactly where they want them. Takes a lot expertise to do that.  The young man who actually did the planning/cutting is not much older than my youngest granddaughter but he’s really good at what he does. 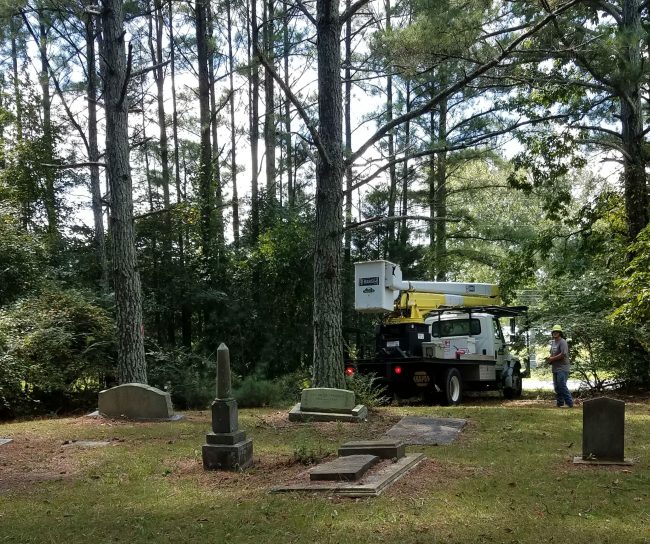 Up in the bucket first to tie ropes around the trees. Now mind you, this obviously is not your average rope – God only knows how much one of these trees weighs. 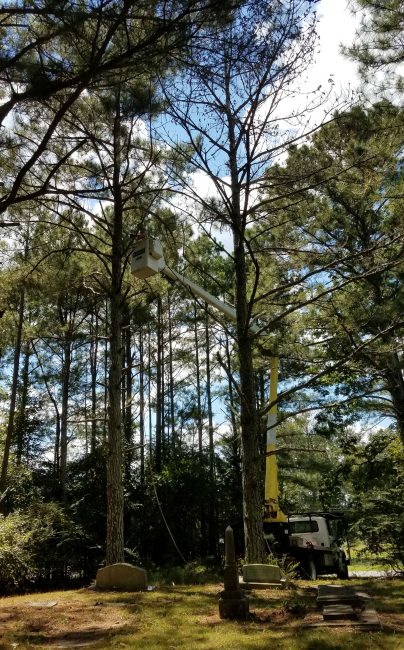 So once that’s done – they move the bucket truck out of the way and park a REALLY big tractor down away from the trees and tie the rope onto the front of the tractor.  Then he starts cutting with his chain saw – on the front side (away from the cemetery) of the tree.  Makes a pretty good sized cut there and then cuts on the back side.

I must say, I almost had a coronary when that tree fell – I thought sure it was going to squash the big green tractor – but he put it exactly where he wanted it – just beside the tractor.

After the trees were cut and cleanup had to  be done.  He took the green tractor (which had big jaws on the front) and moved it around and moved it around until he got a load in those jaws and took it down to  the front of my yard and dumped his load into the ditch.  The huge truck sitting in the edge of the road then picked up the brush with different claws and dumped into the big truck. 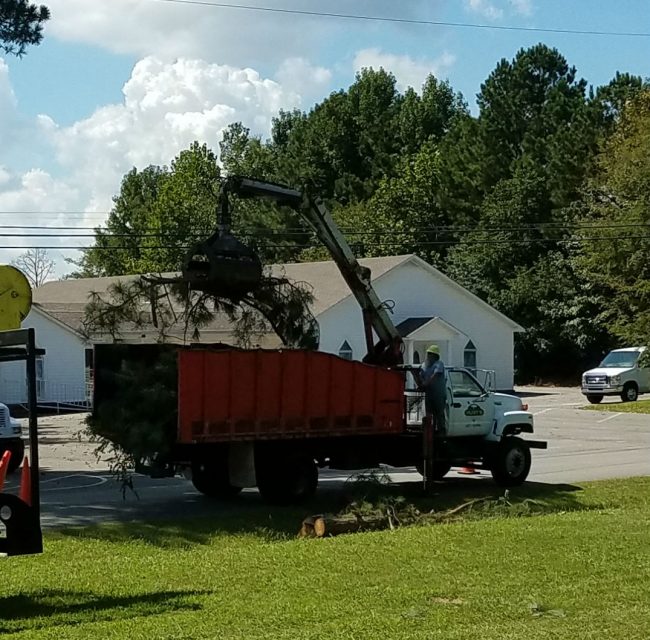 When they were finished there was barely a small twig left on the ground.  It was fascinating and a little scary to watch.

When I was trying to get a decent picture of them putting the brush into the big truck I managed to step in fire ants – NOT something you want to do.  Those little rascals are tiny, very aggressive and have powerful stings that feel much like ‘fire’.  And, they wait till a lot of them are on you and someone gives the signal – STING – and they all start at once.  Of course, I was wearing flip flops!  I knew better, but was in a hurry to get outside when I saw the tree cutters were here.

And, just as an aside – the little fire ants love to get between your toes and your fingers when you’re trying to  get them off of you 🙁

It was worth it though getting to watch all the tree cutters did.  There were 3 of them and I think they were there just under 2 hours.  Job well done and I’m pleased.  Sure is a lot more afternoon sun in the cemetery now.

This entry was posted in At Home, Whatever and tagged cemetery, Chuck, fire ants, graves, tombstones, tree cutting. Bookmark the permalink.

Oh man, fire ants are THE WORST!!! I remember SITTING on a fire ant hill one time in shorts – OHMYGOSH. Sorry for your pain but I bet that was a sight to see!

Yeah, #3 son said he would have liked to have seen the dance. 🙁
Iris