Okay, so here’s a health update.  After this one I’ll try not to bore ya’ll with my medical stuff.  I sincerely hate to moan and groan and hope I’m not sounding that way here.  Since I had so many sweet messages, phone calls & texts, I wanted to let everyone know the outcome of my hospital visit.

I’m back home, just sore and tired and a bit disappointed that I didn’t get the outcome I’d hoped for.

The ablation didn’t actually happen.  They went in to my heart as planned, but when they induced the irregular activity in my heart the doctor found it was jumping around in too many places (I don’t think jumping around is actually the medical term😀).   So he decided to abort the procedure.

Apparently the previous ablation site was great, but I now have many more places that send out bad signals.😣  The doctor said he cannot ablate the entire upper portion of my heart (probably a good decision).

So…. In addition to the medication I was already on, I’m now on a new drug that’s used to restore normal heart rhythm and maintain a regular, steady heartbeat. It is also used to prevent certain types of irregular heartbeat from returning.  This drug works directly on the heart tissue to slow the nerve impulses in the heart.  Have I mentioned how much I dislike taking medications?  They ALL have a gazillion possible side effects (this one has some bad ones).  But apparently I’m  going to have learn to live with it.

After the procedure the doctor said, “at least we’ve narrowed down the problem”, and he doesn’t think there’s any cause to worry about a heart attack or stroke.  At least that’s good news.

So, I’m resting and enjoying my sons being here.  They have been wonderful and I rather like their company, 😍  even though they can be pretty bossy.  I’ve talked to #2 son and my daughter and several of my grandchildren – so it’s not all bad. 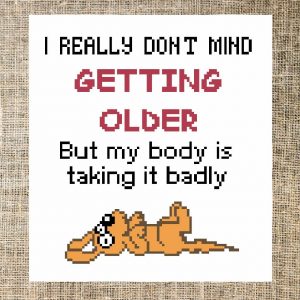 I’ll be cross stitching and maybe even designing a new cross stitch chart or two.  #3 son gave me a good idea for a new chart.

I’m trying to be thankful that there seems to be a” medication solution”.  I go back to the doctor in 6 weeks to see how it’s doing.

This entry was posted in At Home, Blessed, Whatever and tagged #1 son, #2 son, #3 son, cross stitch, daughter, grandkids. Bookmark the permalink.

Well, glad that for now the issue seems manageable ? I’m so bad with assessing other people’s health, ha ha. I know you don’t like taking meds, so I’m sorry that is your current situation 🙁 Glad you have your sons there. One of the perks of my surgery was getting all to myself for a week!

Thanks Bettye. Surely enjoyed having the sons, and they cooked for me the whole time – now THAT was a great side effect of this whole thing. I have rather enjoyed being at home. I’m at home lots of time, but it’s kinda different when you know you’re not supposed to drive. There are a number of friends who have called and offered any assistance that I needed – so I’m covered there. I just don’t like to having to depend on others

Thanks Jacki, I continue to feel better every day. Have had just a couple of racing episodes that only lasted seconds, but not the fluttering – so maybe the new medicine is working. My eyes seem more blurry than usual – and that’s one of the side effects 🙁 But thankful this is apparently a manageable condition. I’m back to the doctor in 6 weeks.
Iris