Halloween was our ‘barn cat’.  Her mother had come to our barn and had a litter of kittens – then got out in the road and got killed. Chuck raised the kittens and over the years they all disappeared except Halloween. 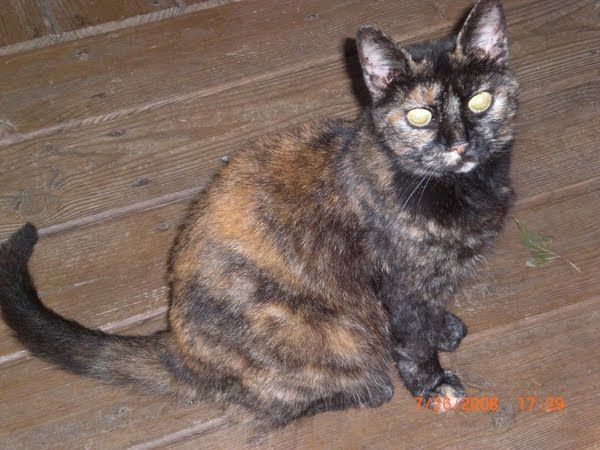 She had a gazillion kittens over the years – with only a couple of survivors. One we gave to a friend and one became our house cat – Fluffy (that’s another story).

When Halloween was a few years old she began to venture into our fenced back yard (by coming over the gate). She would show up every day at feeding time and ‘escort’ Chuck to the barn. He would sit with her, pet her and talk to her. 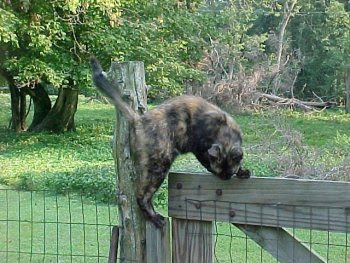 When he got sick the feeding chore fell to me, but she wasn’t nearly as impressed with me as she was with Chuck. She moved to the lean-too next to the goat barn (which was closer to the house than the big barn). Then when Chuck died she moved to the deck. When she moved to the deck (at 11 years old) it was time for a vet visit. I did not need more kittens.

She became “my” cat and was quite tame. She thought the dogs were just there for her to rub on. When Boots arrived she even shared her deck with him occasionally. She had a nice house and a comfty bed on the deck. I brought her in a few nights when it was extremely cold, but she was definitely NOT impressed. Her domain was the deck and the back yard. She thought the chaise lounge was just there for her benefit. Occasionally she would lay on the deck rail so she’d have a better view of her world. I don’t think she ventured out of the fenced back yard at all in the last 5 years of her life.

I fed her on top of a table on the deck and she jumped up there every morning.

She lived to be 17 years old – all outside – the last 6 in my back yard.  One morning I went out to feed her and heard her crying.  I found her in the grass – she couldn’t stand and once I got her to the vet discovered she couldn’t see.  She did respond to my voice but was paralyzed.  I held her and whispered sweet nothing to her as she crossed the rainbow bridge.  I still miss her and that was 9 years ago.  Wish I had more pictures.  The Vet said 17 years was amazing for an outdoor cat.

This entry was posted in Animals, At Home and tagged cat, cats, Chuck, Halloween. Bookmark the permalink.

What a wonderful story Iris. That is incredible that she lived so long. When I was growing up, we always let our cats outside but they didn’t live that long.
XOXO
JOdie
http://www.jtouchofstyle.com

She really was a sweet cat – but always outside (by her own choosing). It is amazing that she lived that long, especially with many of those years at the barn. I doubt my current cats would be impressed, but I miss her.
Iris

I’m so glad that Halloween was able to be with you for 17 years!! What a wonderful cat and you have such great memories of her. We always remember our furry family members!

Oh yeah – may furry family members over the years – just some kinda stand out a bit more. I guess Halloween was one of those.
Iris