Okay, I promised a post about my geese.  Well, actually they were Chuck’s geese.  A Christmas present to him after we dug the pond (which kept water in it just fine until after he died – I blamed him for a long time, but have finally decided it’s been the 16 years of drought conditions that have caused it).

So his birthday present that year was water foul.  A local farm nearby raised all sorts and he got to pick them out.  The two Canadian geese had their wings clipped so they couldn’t fly away.  He named them Duck and Duchess (and they definitely lived up to those titles). 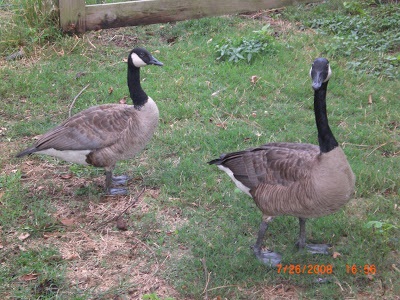 They got along with the goats really well, since they bossed the goats around.

They were pretty cantankerous, but wanted their dinner on time.  He, of course, fed them every day – as long as he could.  I think they probably liked him more than anyone else as they got even more ornery after he was gone.

They produced a number of offspring over they years – who of course flew away when they got big enough.  But that’s okay.  Two permanent ones were plenty.

This entry was posted in Animals, At Home, Remembering, Whatever and tagged Chuck, geese, pond. Bookmark the permalink.

They sound like such characters! It’s nice you had them around even if the little ones grew up and flew away when they got bigger!

Hope that you are having a nice weekend! It’s a long weekend here 🙂

They were definitely characters. We’re having thunderstorms and on and off rain. Enough thunder that my little dog is not happy. Hope your long weekend is good.
Iris