Family history says this house went through a number of  ‘advancements’ (changes) over the years.  This picture is pretty much how it looked when I was growing up.

Originally built by Ira R. Foster (my great-great grandfather) but known as the Ayres home in my time.  Foster served in the Georgia House of Representatives and both Georgia and Alabama Senates, was wounded in the Seminole Indian War and served as Quartermaster General for Georgia in the Civil War.   He had extensive land holdings in both Georgia and Alabama and moved his family to Georgia Mountain after the war (wish I knew why he chose this location). 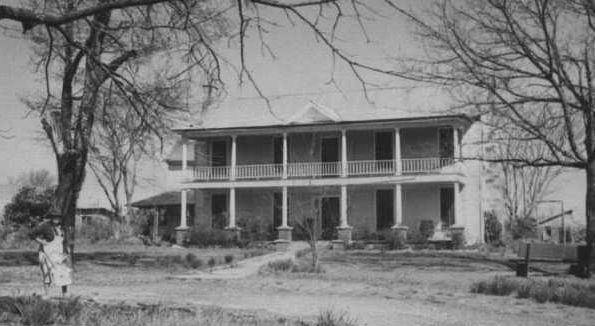 Btw, that’s my grandmother in the picture – complete with her ever present apron and straw hat.  She loved flowers and had wonderful flower beds in the front on the sides.

My mother and I lived with them during WWII when my Dad was in the south Pacific in the Navy.  It was quite a house and as mentioned above had housed several generations.

Foster built his house on top of the mountain.  To reach the top back then one had to come by river to Foster’s Landing (now underwater and not too far from the present Guntersville Dam) and up the (now) back side of the mountain.

I always wondered why the General chose this particular spot to put his home when he owned much of the mountain.  There were bluffs with fantastic views, much more scenic spots and miles of riverfront.  But perhaps this would have been the most protected spot.  Away from the river – no military gunboats.  High on the mountain – no chance of flooding, and frankly quite difficult to reach.  And maybe, it felt safer here to those surviving a terrible war!

Built in the late 1800’s, the foundation was all rock – some HUGE, that was brought up from the “bottoms” (the valley which had rich farmland and is now covered by Guntersville Lake).  The walls were all wood – really, really wide boards – some at least 12″ wide (shiplap I guess they would call it now)  that had been covered with ‘cloth wallpaper’.  By the time I came along it contained 14 rooms, a few with electricity that was installed sometime in the 1940’s.  No plumbing, though there was a telephone.  Heating was fireplaces and pot bellied stoves.  My Dad installed gas heaters in the kitchen and my grandmother’s room in the late 1950’s.

There were 14 large rooms, several large hallways, an enclosed “well” porch off the kitchen (a luxury – one didn’t have to go out in the rain or bad weather to get water), two 2-story fireplaces and one single story one, a large enclosed area that connected two sections of the house, four large porches – the front with brick pillars and white columns.  A pear shaped driveway led from  the road to the house.

There were also numerous outbuildings:

The house became my Dad’s after my Grandmother died.  My family lived in it briefly when #3 son was born, then it was unoccupied.  My Dad kept it locked and boarded up – that that didn’t stop vandals 🙁

The house finally became mine in the late 1980’s – and burned not long after – taking my heart with it.  Chuck had planned to redo and update the house.  He would probably have killed himself trying – but wouldn’t it have been wonderful.  We never knew for sure what caused the fire.  Vandals and teenagers were numerous and it was speculated that some had tried to have a fire in one of the fireplaces that got out of hand.

I have no interior pictures (I wish) – just in my head and heart.  And those I remember well.  <sigh>

We lived away and moved back here when Chuck retired in 1990. My home is where there used to be cotton fields, a little to the southwest from where the old house was.  I can see the well from my bedroom windows.  I have such wonderful memories of the house.

Such great history for your family, Iris

OMG…what a treasure. And to think it was that well built that it withstood SO many years. I can’t even imagine how heart breaking when it burned.
I bet you could paint (or have someone paint) some of the insides from your memory. I’ve heard of people doing that.
Your photo reminds me of Gone with the Wind. I’m sure many houses looked like that. It’s so regal!
XOXO
Jodie
http://www.jtouchofstyle.com

I would love to have “something” from the inside – and actually more from the outside. I do have a painting of the house that hangs over my mantle (forgot to post a picture of that – maybe another post). My Dad found it at an art show. A local artist had taken a picture and painted from that. It’s not completely correct, but better than nothing. Can’t believe I forgot that, especially since I look at it every day. I’ve thought about trying to draw at least a diagram of the house. Maybe… Iris

Oh, what a heartbreak to lose such a magnificent home with so much personal history! I can only imagine the wonderful memories you must have from it.

And I bet you’re right, during wartime, “views” were probably not nearly as high on anyone’s dream home wish list as SAFETY. And if you can see OUT, then others can see IN.

At least you have this one picture…and the memory pictures in your mind.

It still breaks my heart to think about it.
Iris