To stop or not to stop

….That is the question.  And, it could be applied to MANY things, but I’m talking about stop signs – yes, the red ones you see all the time when you’re driving.

I’m reminded of a story because a friend recently received a ticket because of a rolling stop at a stop sign.

A long time ago – we lived out in the country near a small town in Missouri.  Our drive home work took us on Interstate 44 from St. Louis and after we exited we turned left, went underneath the highway and came to a stop sign.  We turned right to go into the little town and get to our home.

Now this was not a heavily traveled road – as a matter of fact, if you went left, there was a car dealership and then the road dead ended – so not a lot of traffic there.  Mostly we came to a rolling stop as we looked to ensure it was safe to turn.

To the right was a service station and one day DH informed me there had been a highway patrolman frequently sitting at the service station – watching.  So, I carefully began coming to a FULL stop at that little annoying stop sign.

And sure enough, one day when I came to my full stop – I WAS REAR ENDED!  The guy who hit me was driving a much bigger/heavier car and I was in a little Pinto, so the whole back of my car was scrunched.

Did he care?  No!  He got out and came running up to my car yelling, “Why did you stop?”

The nice highway patrolman who was conveniently sitting at the  service station that day was kind enough to explain why I’d stopped as he gave the offending man a ticket.  I don’t know how much the ticket AND having my car repaired cost him, but hopefully it made him be more careful in the future. 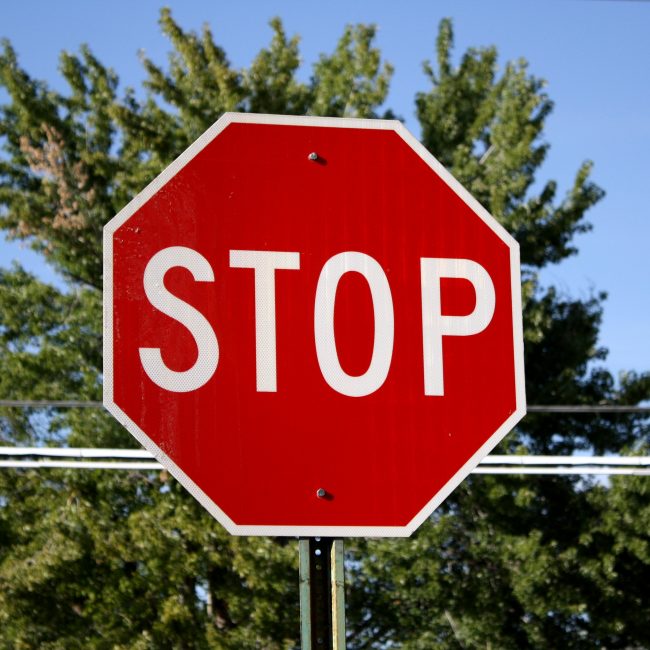 Do I enjoy stopping at stop signs that could just as easily be yield signs?  No!  Do I stop  at them – you bet I do!  And if there’s someone behind me I pray they’re paying attention.

This entry was posted in Uncategorized. Bookmark the permalink.

Very nice post. I just stumbled upon your blog and wished to say that I’ve truly enjoyed surfing around your blog posts. In any case I will be subscribing to your feed and I hope you write again soon!

Glad you enjoyed it – thanks for visiting.
Iris

I read, “I’m reminded of a story because a friend recently received a ticket because of a rolling stop at a stop sign.” and thought, hey, that just happened to me…and then realized, oh, that probably IS me, ha ha 🙂 Oh no, guy rear-ending you! And gosh, you in a Pinto! When I was in my teens, I guess, the story was that Pintos EXPLODED upon rear impact. And that was long before social media, so who knows who got that story going, but I’m glad it didn’t happen to you! That’s pretty funny, though, the man asking why… Read more »

And yes, you were the ‘reminder’ of my long ago story. Loved my pintos though – I had several over the years.
Iris

You remind me of me, Iris. After I got a ticket for speeding when I was 20, I decided it’s not worth it anymore, and to follow the speed limit and laws. It just makes life easier and less stressful. Sure, I’m called a grandma driver, but I’m okay with that!!!
XOXO
Jodie

That’s pretty much me. I traveled a lot in my job back in the day. One VERY early morning ticket that made me really annoyed with the cop (he and I were the only ones awake in that sleepy little town), but God reminded me – if I hadn’t been speeding I wouldn’t have gotten the ticket. So, that was it. I’m pretty conscious of speed limits & signs now. Grandma driver isn’t so bad. 🙂
Iris