Except for being stuck inside (or the horrors),  Boots seems to be doing well.

He got to come home late on Friday and just lounged around over the weekend.  He’s on antibiotics – which is tricky.  Don’t understand how he can find that tiny little pill in canned cat food (which he loves), but….  And of course, both Koda and Emma Grace go nuts when they smell the canned food and I have to feed all 3 of them. We return on Thursday to be checked and have stitches out.

I discussed the inside/outside situation with my vet.  She had a few suggestions – most of which I’d already thought of or read online.  One was to get a tall cat tower and put it in front of a window where he could climb up and see out.  That way he won’t be as interested in going outside (yeah right!).

Did that – now bear in mind – my house is FULLLLLL.  I have furniture everywhere and don’t really have a ‘free’ window.  So, I had to do some reorganizing (I can only do that so many times) in my bedroom.  But, I managed – got the tree, put it together (by myself thank you 😄) and it’s in front of a window.  Both cats are totally ignoring it 😒😒😒 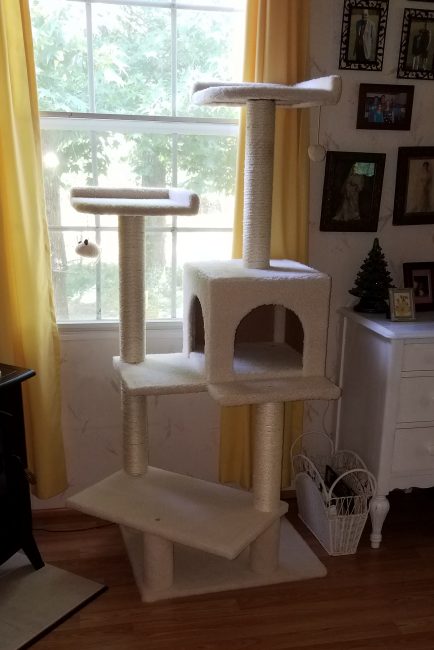 I’m not convinced this was a simple cat fight as there were not other marks on him except the puncture wounds in the back.  But, guess we’ll never know.  He definitely looks the worse for wear, but it could have been so much worse. 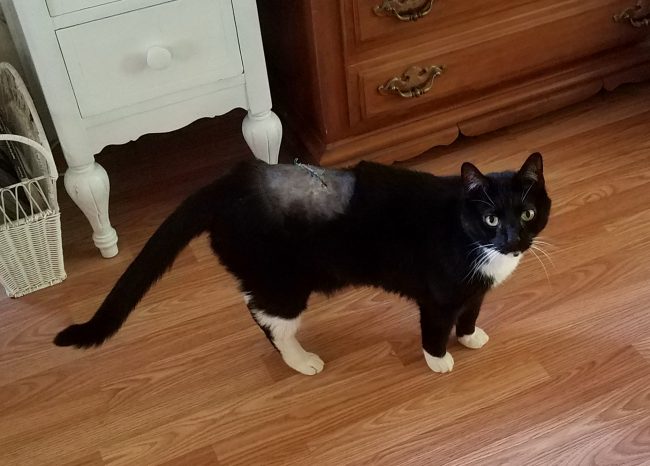 I can’t even walk out on my deck now and I have a difficult time just letting Koda out for bathroom duty.  The vet did say that some cats can NOT be made to be inside cats after being outside for so long.  Guess we’ll see what the future holds for the inside/outside situation.

This entry was posted in At Home, Whatever and tagged cat, vet. Bookmark the permalink.

I’m glad Boots seems to be doing okay. We could never get our to take the antibiotics any which way…ugh!!
As for the tree….our previous cat loved his. But we got rid of it and never got another one. It’ll be interesting to see how it goes… Have you tried catnip on it??
XOXO
Jodie
http://www.jtouchofstyle.com

I have tried catnip – both cats are still totally ignoring the tree. Well, Boots has agreed to sleep on the very bottom occasionally, but that’s it. Neither of them are even remotely interested in the catnip, or treats placed on the tree. Maybe I just have weird cats. 🙂
Iris