Boots is in the kitty hospital

Boots  – is my 10 year old cat – he’s indoor/outdoor/fixed/has all his shots.  He loves to be inside – when he wants to be – and hates is otherwise.  Sometimes he spends the night inside/sometimes outside.  He had to spend the time inside over the Christmas holiday and again in March when I traveled – and he  was not a happy camper.

I know, I know – cats shouldn’t be outside.  And I know they don’t usually live as long – lots of bad things out there that can hurt them.  We did have a barn cat that lived to be 17 years old but the vet said that’s pretty unusual – but  that’s another blog post.

Anyway, this is about Boots, and Boots is at the animal hospital.  😰

If he’s outside, he’s almost always on the back deck rail when I get up in the morning – he wasn’t there on Friday and of course I was concerned.  I called and called – no Boots.  He finally was back on Saturday afternoon.  Had a “spot” that looked kinda like an insect bite on his right hip.  He came inside and basically stayed there all weekend, very lethargic.  By Sunday morning he had quite a big ‘lump’ on his back – so it was off to the vet first thing on Monday.

She said the spot I saw was a puncture wound – and she found another one –  they’re bite punctures from a fight.  Boots is a pretty big cat, is there another cat around who could best him, or….  I live in the country with a pretty grown up pasture right behind my back fence and I know we’ve had coyotes in the past.

He was running a pretty high fever when we were there on Monday and of course she kept him.  Talked to her later in the day – she had to open up the ‘lump’ – said it was infection and quite deep.  So, he’s in the kitty hospital with drains and on antibiotics.  I find out more this afternoon.

Boots on a better day… 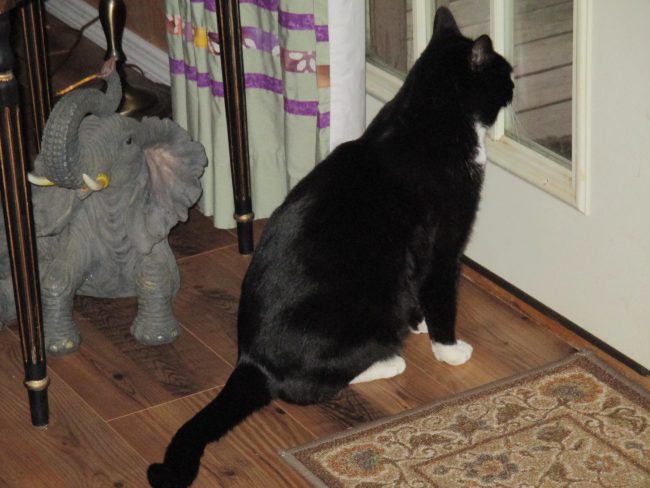 He is really a laid back, sweet cat, and I would love to turn him into an indoor cat, but I have a feeling he would shred my furniture…. which isn’t great as it is but….    So, I’m not sure what our future holds.

This entry was posted in At Home, Whatever and tagged animal, animal hospital, cat, cats, coyote, kitty, vet. Bookmark the permalink.

Yay!! I can comment now, Iris!!
Your Boots is a handsome devil. Keep us up to date about his progress!!
XOXO
Jodie