What a Special Gift

I shared a post in February about visiting old friends (Pearl & Wallace) and this post is about them – more or less.

A couple of months later I received a large box in the mail from them.  What in the world???  Wasn’t heavy but was pretty good sized.

Opened it to find one of the nicest gifts I’ve ever received. 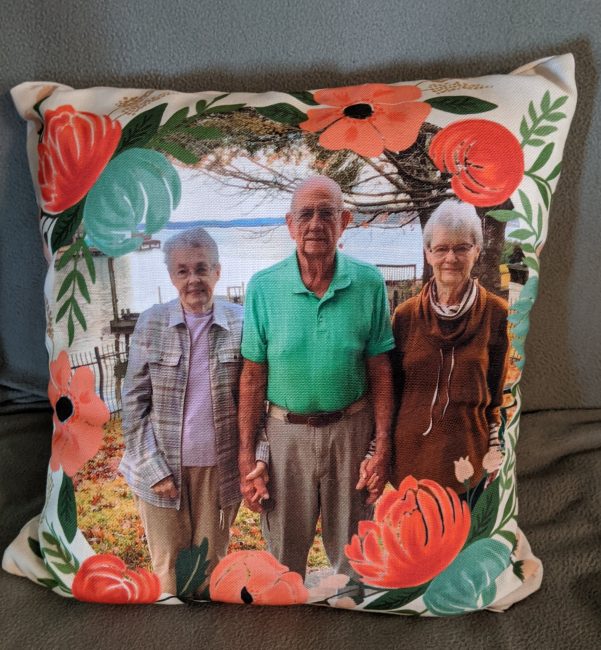 Obviously that’s a pillow.  The photo is one #2 son took of us on their back patio – the flowers were a nice bright addition.

When I called to thank her, she told me that she only mailed the pillow but that her daughter-in-law had surprised her with “two pillows”…. one for her and one for me.

It’s printed on a coarse type fabric and is about 15-18” square.  Don’t know where she had it done, but they did a good job.

Pearl is a very special friend and I so enjoy this momento of our visit.  I have it sitting on my couch so I can just look over and be reminded anytime.

This entry was posted in At Home, Blessed, Remembering and tagged gift, home, old friends. Bookmark the permalink.

What a lovely gift and one that you can look at often and remember a happy time with your friends!

And, I am enjoying it a lot.
Iris

This is such a lovely gift 🙂

Thanks – I really enjoy it.
Iris

What a fabulous memory Iris. And a great way to show off such a nice photo!! This gives me an idea!!
XOOX
Jodie

It IS a great idea – I would have never thought of it, but I sure love it.
Iris