Okay Bettye – this post is because of  your encouragement.  There are a few people out there in internet land who belonged to an ebay email group that I was part of ‘back in the day’  that might remember the hole…. but I’ll try to ‘splain it to everyone else.

My parents were collectors of all things and I grew up in clutter (I seriously dislike clutter and things not in their right place).  Their house wasn’t like the ones you see on  TV, but it was bad enough to drive me crazy.  In fairness to them – the biggest portion of their ‘stuff’ was stored in “the little house” – a small house built behind their home. I think a lot of my mother’s hoarding stemmed from her childhood.  My grandfather was a dirt farmer and she grew up during the depression with literally only a roof over her head and food on the table and she always craved more.

So, now  you have the history.

In the late 1990’s it became obvious that she could no longer take care of herself (she suffered from alzheimer’s).  She entered an assisted living facility designed for people with dementia and since I’m an only child it was left to me to clean out her house and the little house.  The things inside the  main house were pretty much divided between my four children, but the little house was a different story.

Fortunately I had the help of family and some dear friends but there was just so very much ‘stuff’ that I was totally overwhelmed.  And I’m not a ‘keeper of things’ I don’t have… a use for/don’t need/don’t want/don’t expect to ever have a need for!  Well, actually I am more so today than in the past.  It’s an energy thing.

There was way too much ‘stuff’ to get rid of – tons of old magazines, knick knacks, you name it, and again, I was totally overwhelmed.   SO, we had a friend who was doing some work on our property and I hired him to bring his bulldozer and “DIG A HOLE’ – a really BIG hole”. 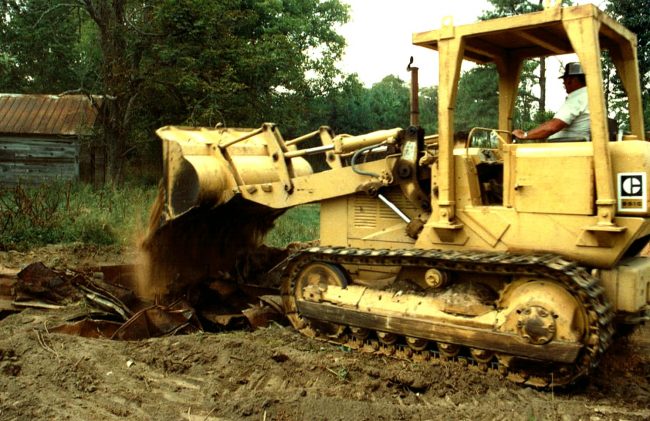 Note:  not the actual digging of the hole – but it is the same bulldozer.

My response to those helping who said “what should we do with this” was frequently “to the hole”.

That was in the day when ebay was probably at it’s height and you could make money selling about everything.  Needless to say, my email group had a collective stroke when they found out what I’d done – and some refer to “the hole” to this day.

No ‘hole’ pictures.  We didn’t have a cell phone handy in those days to snap a picture of everything – and besides, that would have been the last thing on my mind. It was covered when we finished and is now totally grown over.

The house is currently rented.   The little house still stands – it still has ‘stuff’ in it – but very little of mine.  I am blessed that my son now owns the house/property and plans to move here after he retires.

I remember those ebay days…I was the one buying up all the stuff…ha ha!!
I love to hear these memories!!

Ah, the story of The Hole. I remember it fondly…though it took me many years to overcome the SHOCK I felt when Iris first told our ebay group that she had BURIED TREASURE. I mean, she’d had TREASURES and she BURIED them. I literally wanted to drive to Alabama and dig the hole up and see what was in there! Ha. I did keep thinking eventually I would see pictures, but she’s right – no one had CAMERAS on their CELL PHONES back then. I guess eventually the property will have new owners (not rushing you out, Iris, I’m just… Read more »