When I was engrossed in furniture re-finishing a number of years ago, I decided I wanted a new coffee table.  Actually saw one on HGTV that I really liked – yes, I watch a LOT of HGTV 🙂 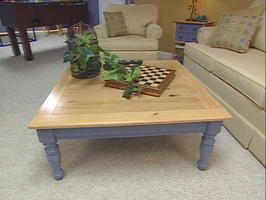 So began the search – wanted all wood – and wanted cheap.  The search was long and tiring but I finally found one at a ‘junk shop’ not far from my house and paid $12 for it (woo hoo) – my kind of deal.  #3 son had to repair one of the legs but otherwise it was in great shape – just pretty rough looking.  As a matter of fact, they had it standing on it’s end in the shop.  I think they were surprised anyone would buy it. 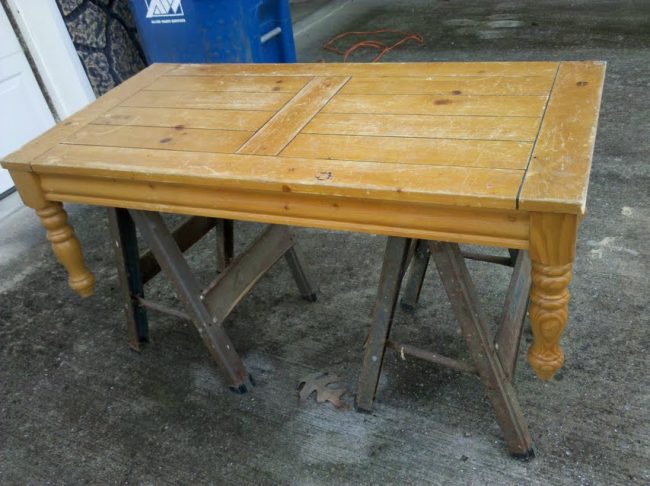 You can see from my inspiration picture that the top and legs were not the same color – and that was one of the things that drew me to it.

So, I sanded and sanded and……. gave it 2 coats of primer (then curing for 7 days), 3 coats of sage green on the legs and skirt, 2 coats of stain on the top, then 3 coats of polyacrylic on the top.  In case you’re counting – that’s TEN COATS of some sort of paint, with all the waiting/curing time time between each one which means it wasn’t a quick project!  I don’t understand how they do this kind of stuff so quickly on HGTV.  Oh wait!  It’s TV, right?

I considered doing the coffee table in yellow (did I mention, I love yellow?), but decided to use the green since I already had/have several yellow tables in my living room.  I took a swatch of my drapery fabric to Lowe’s and they matched it for me.  It actually matches really well, though it doesn’t show in the photos that well. 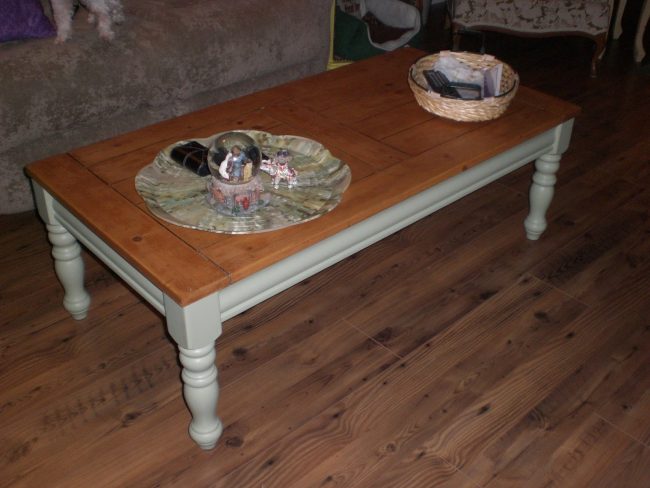 I’m still really pleased with the results – but I did get pretty tired of painting stuff.  As I said, this was a number of years ago – not sure I’d be up for all that sanding and painting in my life at this point – but I’m still loving my coffee table.  And yes, that IS an elephant on the tray. 😊

This entry was posted in At Home, DIY, Whatever and tagged Asher, DIY, paint, son, table. Bookmark the permalink.

So charming! And I’m impressed! All those coats of paint! I don’t have the stick-to-it-iveness for projects like that. But it looks great!

It did take a LONG time and lots of coats of paint, and I’m generally not very patient. But, #1 son is a plant superintendent of a plant company and he would have been mortified if I hadn’t done ALL that. I do love my coffee table now and am glad I stuck to the steps he outlined for me.
Iris

Oh you did a great job with the table, even if it took a while to see your dream become a reality! 🙂

Hope that your week is starting well 🙂

Thanks. I am still enjoying my table.
Iris

Talk about perseverance Iris. But you did it the right way. I’ve painted an old dresser and I didn’t sand it or use as many coats. And now I need to redo it. Ugh…
OXOX
Jodie

Thanks Jodie – I have a son who’s a plant superintendent of Paint Company and he gave me advice (and expected me to follow it). It wasn’t actually that difficult – just took a long time for this very impatient person.
Iris

I love what you did to that table. It looks great. Well worth all the time and work it took.. PS: I watch a lot of HGTV too!