I’ve been “in a mood today” and not able to accomplish much.  So – I’ve been doing some “clean up” on my computer and ran across this little story from my ‘original’ blog attempt.   It was written at a time when I had goats in the pasture, kittens on the porch, and grandkids living with me – 2009.

Boots and his brother (the kittens) had apartently  been dropped off and found their way to my porch – like I needed more cats in my life.  However, they managed to win me over that day.

Who would have thought. Well, at least now, the two resident front porch kittens are earning their keep. First, Boots is a great mouser – though he refuses to share with his lazy brother, Firestar. Or, we thought he was lazy till late yesterday afternoon.

Here’s the story…. Everyone was gone to various places except grandson Nathan who went to the kitchen for food (an activity he did a lot – he was a big growing football player). He heard a goat crying. You know, the ‘help me I don’t know what to do’ cry. Sounded like it was coming from the front (shouldn’t be coming from the front). Looked out and sure enough, “Darth Vader” (little black billy) was OUT of the pasture and near the road in front.

So, Nathan goes rushing out (barefoot) to try and get Darth Vader back in the pasture before the dumb little thing gets out in the road and gets run over. Opens the big gate and tries to herd Darth Vader towards it. Darth Vader does not cooperate, runs into the woods beside the cemetery (at the edge of my front yard). This chasing/herding goes on for a little while with no positive effects. 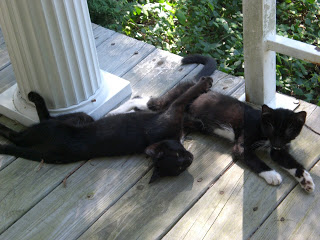 The goat herding kittens retire to the front porch.”

This entry was posted in At Home, Fun, Remembering, Whatever. Bookmark the permalink.

OMG…too bad you didn’t have that on video. That would have gone viral!!!
OXOX
Jodie
http://www.jtouchofstyle.com

Yeah, that would have been some video. It was definitely entertaining – and pretty amazing.
Iris

Oh my, what a cute and funny story, Iris! Aren’t cats remarkable? Our two cats add a lot of humor to our lives for sure! I understand about being “in a mood.” Those days come and go, thankfully. Hope that today is a better day for you.

Cats can certainly be entertaining – I wish I had that story on video.

I try NOT to be in a mood too often, but you know, sometimes…. I’m doing okay though and very blessed.
Iris