This is another in our monthly “Where Bloggers Live”.  I’ve really enjoyed doing this series and seeing what my other blogger buddies have been up to.  Please be sure and check out all their ideas about Pets – I can’t wait. 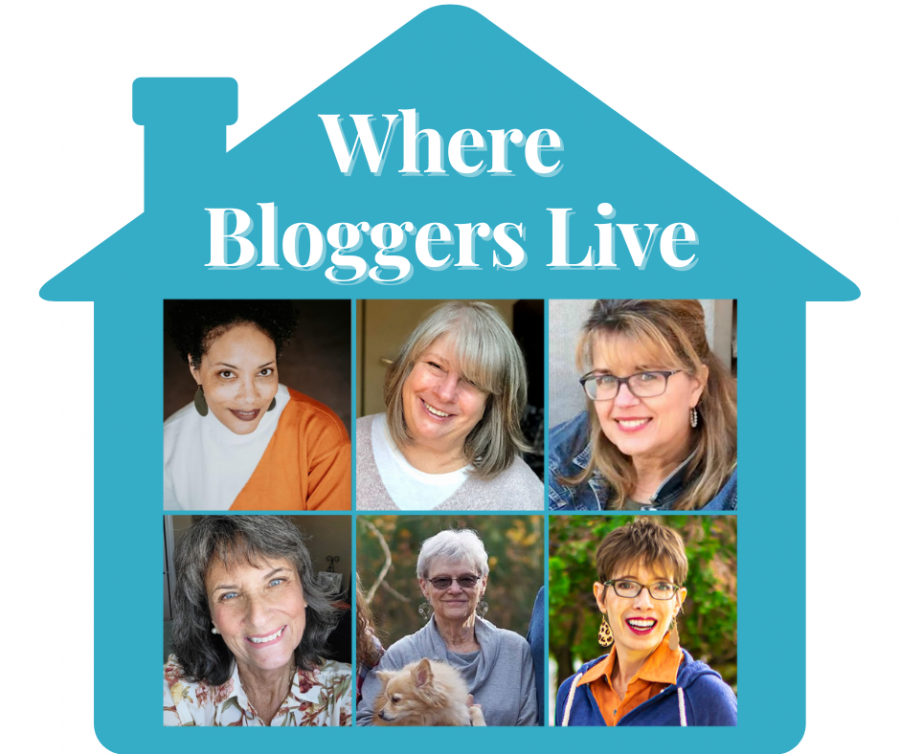 So here we go – my pet list has been extensive over the years, but just so you know, mine have all been 4 legged, furry pets.  I’m just not into the scaly kind.  I could write pet stories all day, but I’ll “try” and shorten it a bit :-)….

My first pet (and I won’t name them all) was when I was about 7 years old and a little terrier.  My parents surprised me with him when he was just a puppy – I named him “Harry”.  I think he’s the only dog my mother ever liked.  He was great, I pushed him around the neighborhood in a doll buggy, dressed him up for neighborhood parades and he was a sweetheart through all of that.  Sadly he only lived to be 4 years old and is buried under an old magnolia tree that was in my grandparents yard (house gone/tree still there).  Then there was a succession of dogs until I married and left home.

Chuck gave me my first poodle as a birthday gift.  Cute story:  this was in the 1960’s so no quick easy communication.  He was over an hour getting home from work that day and no call from his office telling me he’d be late.  I was frantic – visualized him in a car wreck on the side of the road.  When he finally arrived, then I was furious!!!  I met him outside and was just about to lambast him when I realized there was a tiny little head peeping out from his jacket.  An adorable silver poodle puppy – Jacques.  (No pictures, didn’t do them quite as much ‘back in the day’).  After Jacques there was Coco – a really sweet but really dumb cream colored poodle. 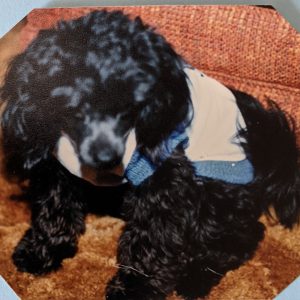 Then this little cutie, Pierre.  He was an adorable little black rescue poodle, who unfortunately had lots of issues.  But the only one of my poodles that my mother ever warmed up to.

And then Frosty (the love of my life) and now Koda (a Pomapoo – poodle/pomeranian mix).

No cats until the last 20 or so years.  Fluffy(a barn cat came inside, she was seriously Chuck’s cat and he was her person), and now Boots & Emma Grace.  You can find several posts about the cats in my life.  Boots is a big boy at about 17 pounds and 13 years old, while Emma Grace 16 years old and only weighs 7 pounds.  Both are indoor cats (now) and are quite friendly.  Both were rescues and have some issues, but very loving to me. 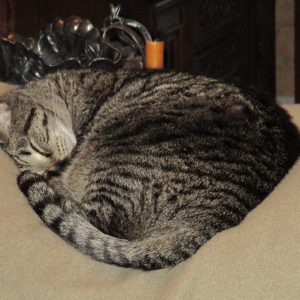 Snoozing on the back of my love seat 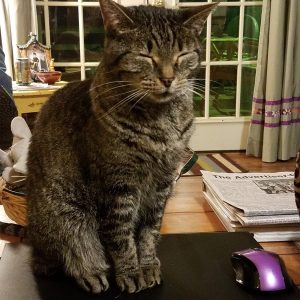 Sitting on my computer 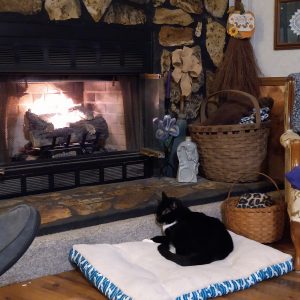 Boots loves being near the fire 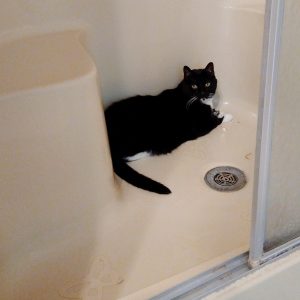 Boots likes to lay in the shower when I’m finished

I can’t write about pets without including Frosty.  All my other poodles were miniatures, but I’d always wanted a teacup.  Chuck was afraid he’s step on such a small dog, but after I lost Pierre, Chuck found an ad for a teacup and took me to see him (with me protesting – I didn’t think I was ready for another dog – until I saw him).  Needless to say we brought him home and he was my 3-1/2 pound constant companion for 16 years. 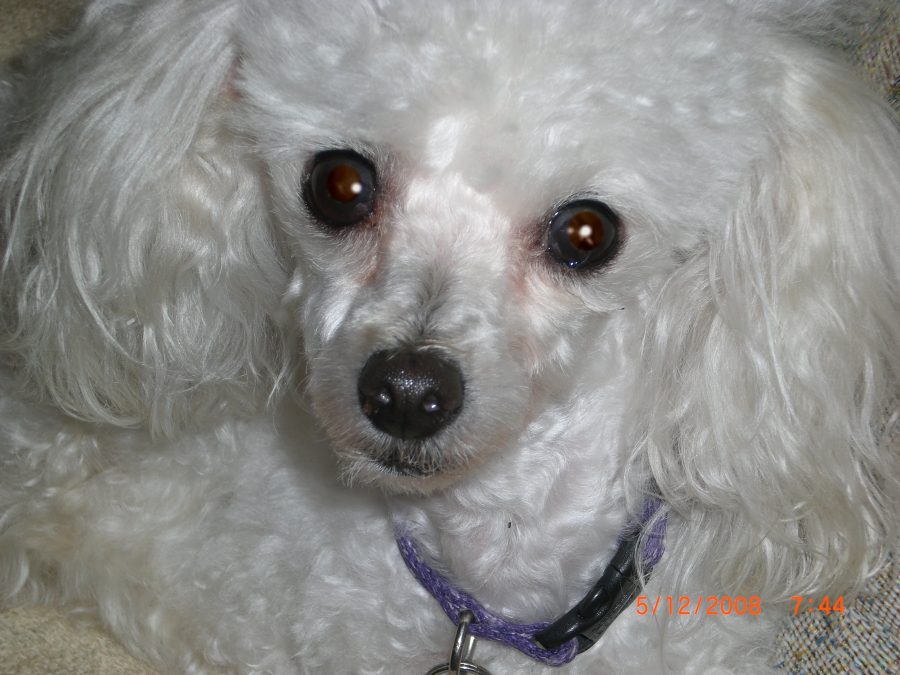 Then I lost Frosty – I was a complete basket case.  DIL had to come to the Vet’s office to drive me home.  Not only had he been my constant companion, but it was almost like loosing Chuck all over again.  I was a mess!!!  #3 son and his family were living with me at the time and they stepped up to take care of me, and Koda was their answer.  He was a tiny, adorable puppy and wormed his way into my heart very quickly.

Now Koda  is something else.  He sticks to me like clue – he’s a 13 pound guard dog.  NO ONE is going to sneak up on me! 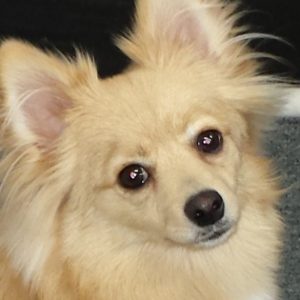 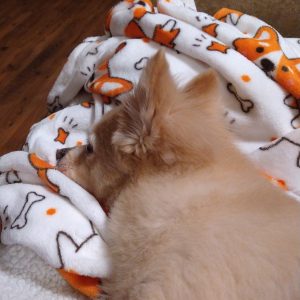 Snuggling on his new blanket

You can see Koda’s puppy picture at the bottom of my blog, and he’s with me in my profile pic, and of course he’s ‘featured’ on the right column. He’s snuggled close as I type this – never far away.  He’s pretty important around here!

Loved reading about your pets. The story about your husband showing up late is so completely relatable and one of those sweet surprises that can’t be pulled off in today’s forever connected world.

Isn’t it funny how they become just as protective of us as we are of them? My girls are my shadows. Except when my kids are home — then they don’t know me. LOL

Thanks Daenel, that story of my first poodle was definitely a sweet memory and you’re right, in today’s world that couldn’t have happened.

I so enjoyed this post. I guess the animal lover in me makes me quite nosy about other people’s pets. Our beloved Cici must have been part poodle and sheepdog. Although we bought her thinking she was husky. I have always heard poodles are so smart. Giggled about Coco not being the sharpest knife in the drawer. Glad to read that EmmaGrace is still going strong. I believe she was the kitty that had troubles in the fall. We have a kitty, Snick, who loves to watch the water run down the shower door once we have finished bathing. And… Read more »

Ahhh thanks Leslie – I do love animals and mine have always been like furbabies to me. Emma Grace is doing well. She has even more close attention since her bout last fall.

It still amazes me to see Boots laying the shower after I’ve been in it.

I always try to take care of my animals. I’m of the opinion if you can’t take care of them you don’t need to have them. and mine are surely my furbabies.
Iris

It’s the saddest thing when they leave us, yet their love in our lives far outweighs the loss. It doesn’t seem like it at the time we are grieving, but I always feel that way later on.
I didn’t share that my husband cried more about losing Tuffy (the mean cat) than he did for his mother. In retrospect, I’m sure he was grieving for both, but our pets really grab our hearts.
Thanks for sharing all of this Iris,
XOXO
Jodie
http://www.jtouchofstyle.com

Ahhh, then what a sweet husband you do have. It is almost like losing a human companion sometimes. I’m so thankful for Koda – he takes his job very seriously of filling a hole in my heart.
Iris

Your post was beautiful and sweet and sad. Little Frosty. This is such the thing about our pets (and our people, of course). I have a Facebook friend who posts about grief all the time…how great grief comes because of great love, and how if youre blessed by the latter, you will likely have to experience the former. I think pets have the ability to leave a hole in your heart and yet fill one as well. Not that we dont continue to love the ones we lose, but a new pet gives us a place to put those feelings,… Read more »

Oh yes, I’d be so lonely without my furbabies – Koda in particular. He does take his job very seriously, and I love him for that. He will never take Frosty’s place, but he definitely has a place of his own. 🙂
Iris

Oh how we love our fur babies. And mourn them when they are no longer with us! I loved reading about all of yours. Our Cassie likes to go in the shower, too, and comes out all wet. So funny! Loved your post.

Well, I’m sure interested to know that other’s cats like to go in the shower. I’ve not had many cats over the years, but this is my first to like the shower. Yes, sure love the furbabies.
Iris

Oh, Iris, I remember when you lost Frosty. My heart broke for you…I know how dear he was to you and such a support when you lost Charles 🙁 {{hugs}}

I’m so glad lil Koda joined you after that.

Ha ha, my cats have all liked to go into the shower after I’m done, too 🙂

You have more self-control than I do – I had to go through EVERY ANIMAL I EVER HAD. Or borrowed. Or stole. Or just passed by on the street, ha ha.

Thanks Bettye for the kind words. As many sweet and wonderful dogs that I’ve had over the years, I’ve never been as heart broken as when Frosty died. But, so much love and support from so many friends and family got me through it. Koda surely takes his job really seriously of protecting and being close. He’s a mess sometimes 🙂
Iris