Fluffy – a past furbaby

I’ve always been an animal lover, and have had various dogs & cats over the years.  The cats were all ‘rescue’.  Mostly dumped in my yard and we took them in.

You may have read the story about Halloween – our barn cat.  I still miss her.  When Chuck was alive and she lived at the big barn she had many, many kittens.  Never knew who the father was and the kittens came in all shapes and sizes.  One particular one was a long hair – gorgeous kitten, and friendly.  Chuck decided she should be a house cat (to someone else) and talked a lady in our church into taking her.  He brought her into our house for about a week to get accustomed to being inside.  We were taking her to church on Sunday morning when the phone rang and the lady had changed her mind.  SO…. “we” had a house cat.

I named her Fluffy as she had very long hair. 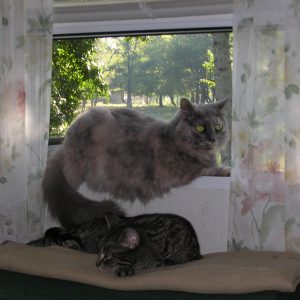 She was always Chuck’s cat and would sit on the back of his recliner and ‘groom’ his hair.

Amazingly she was very tolerant of Emma Grace (once she got used to the idea of another cat in the house).

When Chuck was so sick she would stay in the bed with him – along with his dog and my little poodle.

Fluffy never went outside again, except once and after frantic searching we found her at the end of the house under some shrubbery absolutely terrified.  I don’t think she ever entertained the idea again.

She developed hyperthyroidism and finally had to be put down.  It’s been quite a long time and phones didn’t have the kind of cameras they have now, so not nearly as many pictures.

She looked NOTHING like her mother, Halloween and really didn’t have the sweet personality of Halloween (except towards Chuck). She did soften up to me some after Chuck was gone, but she was always his cat.

This entry was posted in Animals, At Home, Whatever and tagged cat, Emma Grace, Fluffy, furbaby, Halloween, rescue. Bookmark the permalink.

She was an angel just when your husband needed one. It was meant to be that the church friend changed her mind. What a beautiful kitty!! And I am sure it was soothing to your husband having her around. We have adopted a stray kitty whom I am calling Fluffy. She stays outside but allows me to softy her and carry her and bring her in on chilly nights. I have bought her a heated house and she has good meals everyday. We also adopted a Halloween for a season in our lives. Enjoyed your story.

You’re right – she was soothing to my husband – and I think she was meant to be in our house all along. We just didn’t figure it out.

Interesting that we have some of the same names for our cats. My current Boots (big cat) was an outside cat for a long time (with a nice house), then an inside/outside, and now a total inside (thanks to very high vet bills).

Our pets are surely something else.
Iris

What a beautiful cat! It’s a shame that the lady didn’t want her but so nice it gave you more time with her 🙂

She definitely was a beautiful cat. I wish I had more pictures of her.

I know you had fun Christmas shopping. I’m doing mine online this year. I always loved going out and just seeing all the Christmas decorations – I’ll definitely miss that this year. Hope you have a great week.
Iris

Fluffy was beautiful. I think about my pets who have left me too. As far as cats, right now we have five boys, all who, like yours, just showed up. They are in and out, depending on their mood. Living in the country, that’s not an issue because there are no neighbors.

Thanks Terri – she truly was a beautiful cat. I live in the country too, but my big boy cat tangled with a coyote last year and after a large vet bill and long recuperation, he’s not inside. He wasn’t pleased at first, but has adjusted and follows me around like a dog.
Iris