Boots and his new ourdoor digs

The original “Cat condo” that I’d gotten for Boots turned out to be unusable after a lot of rain.  It’s original item was listed as a “Chicken enclosure” – but it’s surely wasn’t made to endure much weather.  So, it’s gone to a friend who actually is going to fix it and put a couple of chickens it.

Moving that was a challenge as #1 son had put it there to stay.  But, it didn’t take him too long to take it off.  THEN, I had to clean the deck.  (Now, this was done before the pretty silk flowers.)

Understand, the deck is outside (imagine that), and after a winter and spring when I’d barely even swept it off…. it was definitely a mess.  Still needs pressure washing, but that’s another day.  I did give it a good sweeping and put out “my flowers”. 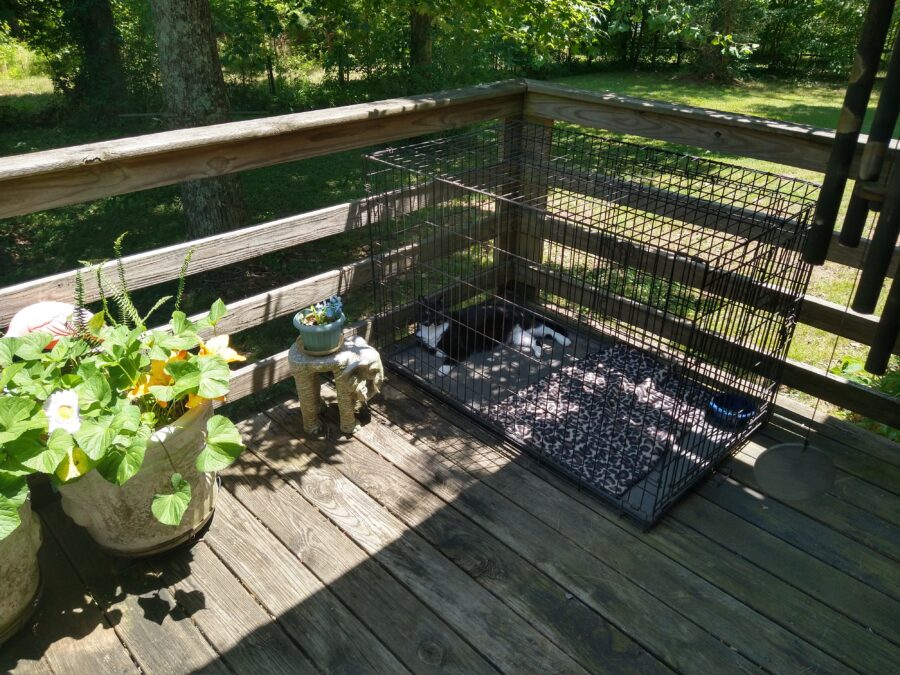 It’s actually a dog crate – for a VERY BIG DOG.  I think Boots loves it.  I started putting him out about an hour a day and he wasn’t real sure about it, but the more days we used it the more he began to like it.  It’s much easier to get him in and out of.  The amount of sun you see in the above picture is about all that location gets during the day, and there’s a ceiling fan running.  It’s warm, but he seems to love it.

I brought him in after a couple of hours this morning.  He wandered around the house kinda meowing,  ate some food, went potty and then was in front of the patio door yowling.  He apparently had done what he needed to do and was ready to recline outside.  Of course the blanket comes inside when he comes inside and sometimes he lays on it and sometimes not.  Sometimes he’s very alert and watching his world and sometimes he naps.

I think this big dog crate that I found on Facebook Marketplace is going to do the job just fine. 🙂

This entry was posted in Animals, At Home, Blessed, Whatever and tagged animals, Boots, deck. Bookmark the permalink.

What a great idea!! Our kitties are old and chubby enough that they can’t get over our rock walls so are ‘stuck’ in our yard. They like to go out for a bit each day. Also, like going out on our balcony. Sunshine and fresh air are good for all of us.

Well, I have a fenced yard, but Boots could easily go over the fence and after his altercation with a coyote a few years ago, he’s inside (vet bill too high to have that happen again). I’m not sure he would roam as much as he used to, but I’m not taking the chance, and he seems pretty happy with the situation as it is. He’s good at letting me know when he wants to go out – and when he’s ready to come back in. And I agree, the sunshine & fresh air are good (for us all). Iris

I’m glad Boots is getting to enjoy the outdoor world in a safe and comfy way! Our Cassie loves it when we hold her and walk outside with her for a short while. We have thought that she would enjoy something similar to what you have set up for Boots. Garden, our other cat, wants nothing to do with being outside. Each cat has their own likes and dislikes, just like humans do! Have a great day, Iris!

Thanks Debbie – Boots does seem to really like his crate and he’s learned to let me know when he wants to go out to it, and when he’s ready to come inside. He actually figured that out pretty quickly. He was originally an outdoor cat, then an indoor/outdoor one, then he had an altercation with a coyote (or that’s what the vet thought it was) and had a very high vet bill. After that I said – NO more roaming outside. And you’re right, each cat is their own person! Thanks for stopping by.
Iris